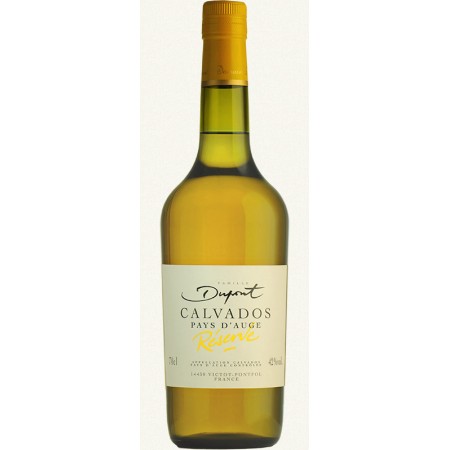 Terroir
CLAY AND OXFORDIAN MARL SOIL.
Varieties
80% OF BITTERSWEET APPLES
20% OF ACID APPLES
Harvesting
FROM SEPTEMBER TO NOVEMBER
Alcohol cont.
42 % VOL.
Techniques used
The apples are mixed, crushed and pressed. The apple juice is fermented right out to give cider to be distilled. Double distillation is carried out 6 months after the fermentation has taken place. The first distillation gives the "petite eau" at 30% by volume and it is the second distillation, that of the "petite eau" which gives the Calvados.
Aging: Three years minimum. In toasted 400 l (88 imperial gallon) oak barrels, 25% of which are new. Bottled when ordered.

(Read also: Tasting Calvados)
Suggestions
- Storage: very long, bottles upright without special precautions.
- As an Aperitif: on its own, over ice, or with a drop or two of water to let it release its aromas.
- For cooking: to flambé, and for sorbets and granités.
- As a digestive: Drinking temperature 20-22°C (68 to 72°F).

The functionality has been deactivated because it uses cookies (More info)
Activate cookies
X Informative - This site uses cookiesincluding third parties for Optimize the user experience while navigating and enable basic functionality; collect anonymous statistics; Profile the user to send him advertisements in line with his preferences.; offer additional features such as maps and social widgets
Click here to deny your consent. If you want to know more or deny consent to all or some cookies Click here.
If you do one of these things, you agree to the use of cookies: Click on button 'OK' on banner; Cliccare on button 'Activate cookies' inside blocks; Scrolling the window; Closing the banner.
OK